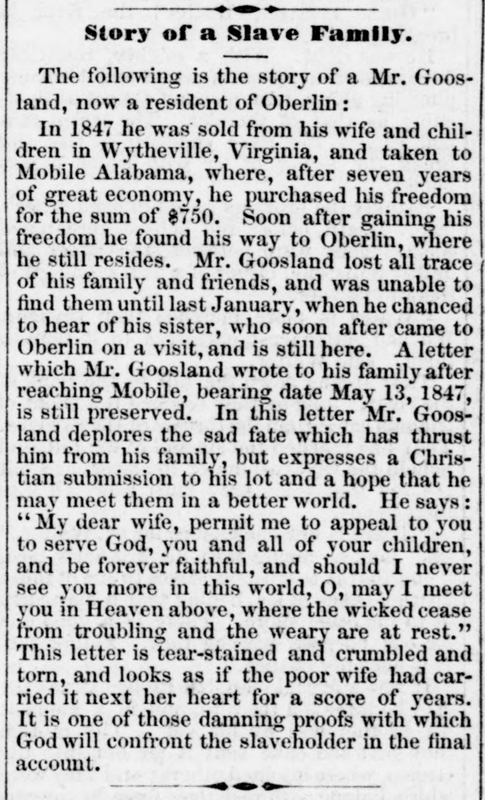 Mr. Goosland, Oberlin, OH, finds his family after 25 years. Newspaper quotes letter he wrote to his wife in 1847, shortly after he was sold and taken from Wytheville, VA, to Mobile, AL.

Bigglestone, William E., They Stopped in Oberlin: Black Residents and Visitors of the Nineteenth Century (1981), 86 (accessed books.google.com): "Matthew Goosland, born a slave in Virginia between 1811 and 1824, was sold in 1846 and taken to Alabama. A few years before the Civil War he purchased his freedom and by 1860 had made his way to Oberlin because he wanted to attend school..."

History of Lorain County Ohio (1879), 186 (accessed books.google.com): "About 1868, Rev. Mathew Goosland, who had been a slave, and had bought his own freedom, began to hold meetings for the colored people in Peck's hall, and members of the [Oberlin] college faculty preached occasionally to them."

Story of a Slave Family
The following is the story of a Mr. Goosland,
now a resident of Oberlin:
In 1847 he was sold from his wife and children
in Wytheville, Virginia, and taken to
Mobile Alabama, where, after seven years
of great economy, he purchased his freedom
for the sum of $750. Soon after gaining his
freedom he found his way to Oberlin, where
he still resides. Mr. Goosland lost all trace
of his family and friends, and was unable to
find them until last January, when he chanced
to hear of his sister, who soon after came to
Oberlin on a visit, and is still here. A letter
which Mr. Goosland wrote to his family after
reaching Mobile, bearing date May 13, 1847,
is still preserved. In this letter Mr. Goosland
deplores the sad fate which has thrust
him from his family, but expresses a Christian
submission to his lot and a hope that he
may meet them in a better world. He says:
"My dear wife, permit me to appeal to you
to serve God, you and all of your children,
and be forever faithful, and should I never
see you more in this world, O, may I meet
you in Heaven above, where the wicked cease
from troubling and the weary are at rest."
This letter is tear-stained and crumbled and
torn, and looks as if the poor wife had carried
it next her heart for a score of years.
It is one of those damning proofs with which
God will confront the slaveholder in the final
account.