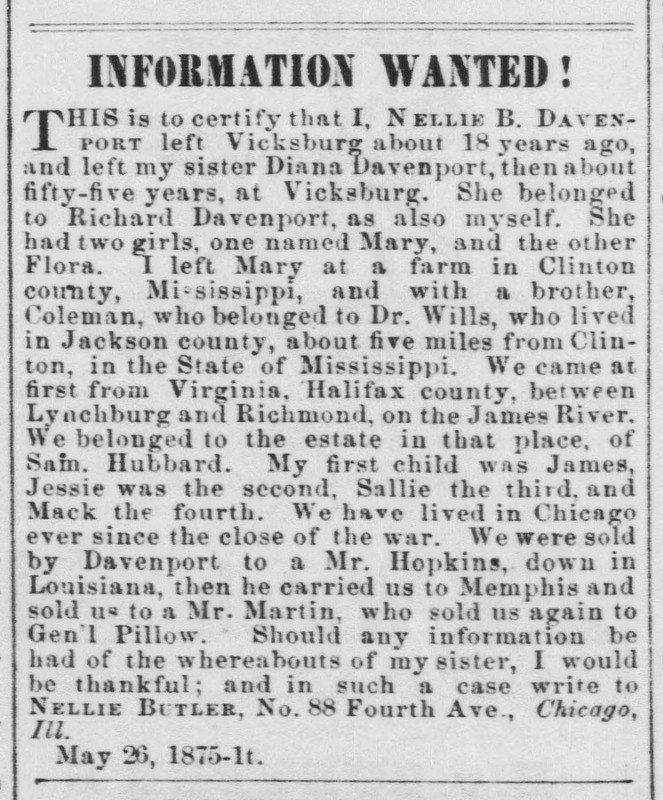 Nellie Butler searching for her sister, Diana Davenport. Butler also placed an ad for her in 1892, under name of "Dinah Davenport."

Nellie Butler placed an advertisement for the same sister in 1892. See: The Appeal (St. Paul and Minneapolis; Chicago), June 4, 1892

INFORMATION WANTED!
THIS is to certify that I, NELLIE B. DAVEN-
PORT left Vicksburg about 18 years ago,
and left my sister Diana Davenport, then about
fifty-five years, at Vicksburg. She belonged
to Richard Davenport, as also myself. She
had two girls, one named Mary, and the other
Flora. I left Mary at a farm in Clinton
county, Mississippi, and with a brother,
Coleman, who belonged to Dr. Wills, who lived
in Jackson county, about five miles from Clin-
ton, in the State of Mississippi. We came at
first from Virginia, Halifax county, between
Lynchburg and Richmond, on the James River.
We belonged to the estate in that place, of
Sam. Hubbard. My first child was James,
Jessie was the second, Sallie the third, and
Mack the fourth. We have lived in Chicago
ever since the close of the war. We were sold
by Davenport to a Mr. Hopkins, down in
Louisiana, then he carried us to Memphis and
sold us to a Mr. Martin, who sold us again to
Gen'l Pillow. Should any information be
had of the whereabouts of my sister, I would
be thankful; and in such a case write to
NELLIE BUTLER, No. 88 Fourth Ave., Chicago,
Ill.
May 26, 1875-1t.