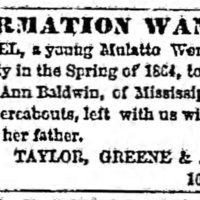 Unnamed father searching for Rachael, who was sold in Montgomery, AL, in spring 1864, by Mrs. Mary Ann Baldwin of Mississippi. 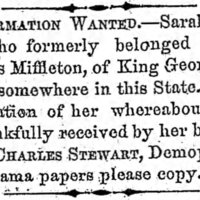 Charles Stewart searching for his sister Sarah Stewart who was enslaved by Charles Miffleton, of King George County, VA.

Stephen Calhoun and his mother, Judy Calhoun, searching for family 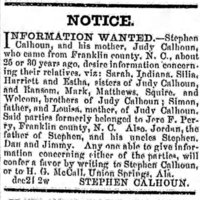 Calhoun and his mother searching for numerous relatives in Franklin County, North Carolina. 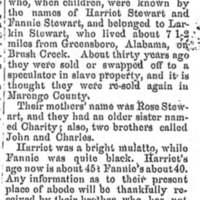 Charles Stewart searching for Harriet Stewart and Fannie Stewart. They were sold to a speculator in Alabama about 30 years earlier [ca 1840].

Bazil Butler and Celestia Butler searching for Thomas and Arthur 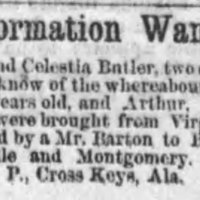 Thomas and Arthur were brought from Virginia 20 years earlier [ca 1847] and sold between Mobile and Montgomery, AL 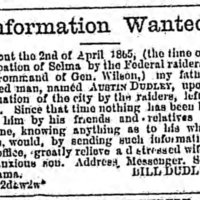 Bill Dudley searching for his father Austin Dudley who left occupied Selma, AL, with Federal raiders, near the end of the Civil War. Has not been heard from since. 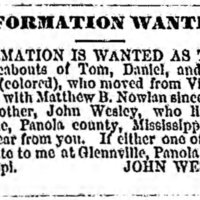 John Wesley searching for Tom, Daniel, and Manual Nowlan, who moved from Virginia to Alabama since the Civil War with Matthew B. Nowlan. 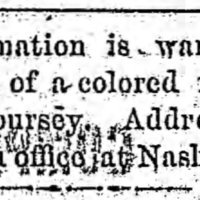 Unnamed person searching for Columbus Coursey asks that anyone with information about his whereabouts to contact the Freedmen's Bureau office in Nashville, Tennessee. 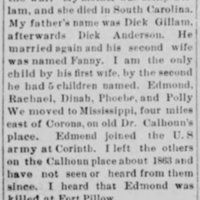 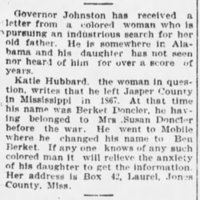 Katie Hubbard's father left Jasper County, Mississippi, in 1867 [during Reconstruction]. He went to Mobile, Alabama, where he changed his name from Berket Doncler to Ben Berket.

Martha searching for her children 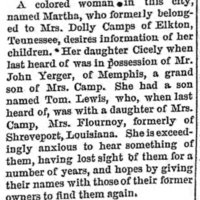 Harriet Burton/Harriet Felder searching for her parents and sisters 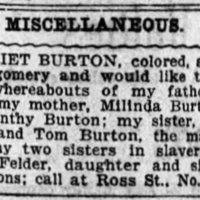 Burton is in Montgomery, Alabama, in 1900, searching for her father, Mat Burton, her mother, Milinda Burton, and her sisters, Cinthy Burton and Mitildy Burton 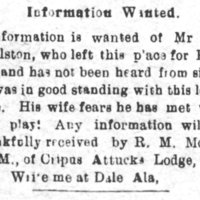 Left for Keyton, Alabama [ca. 1906] and not heard from since. Searcher is W.M. [Worshipful Master] of Crispus Attucks Lodge No. 122. [a black Masonic lodge], Dale, Alabama. Gholston was a member of this lodge. Mrs. Drake last saw her son in Nashville, Tennessee, in 1864 [during the Civil War]. She formerly belonged to Mr. Shanklin.

Mrs. Alice Young searching for her mother and sisters 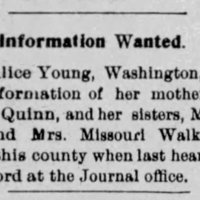 Milton Anderson searching for his folks 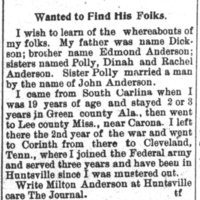 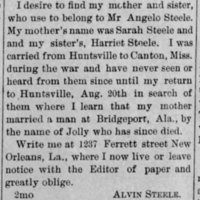 Alvin Steele was carried from Huntsville, Alabama, to Canton, Mississippi, during the Civil War. He returned to Huntsville in 1895 in search of his mother and sister. 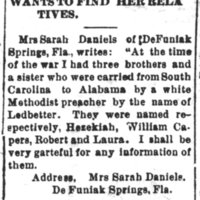 Mrs. Sarah Daniels searching for her brothers Hezekiah, William Capers, Robert, and sister Laura. A white Methodist preacher named Ledbetter carried them from South Carolina to Alabama at the time of the Civil War.

Mr. George Noels is searching for his sister, Martha Noels They parted over forty years ago [ca 1868, during the Civil War or Reconstruction], at Pine Bluff, Arkansas. 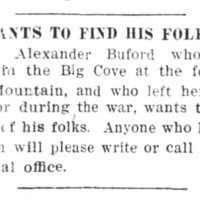 Mr. Alexander Buford was born in the Big Cove at the foot of Big Mountain [Big Cove, Madison County, AL]. He "left" there before or during the Civil War. The last heard of them they were in St. Louis, Missouri. 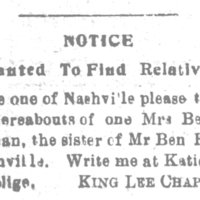 She is the sister of Mr. Ben F Batts of Nashville, Tennessee. Her husband was Jack Moore. She was at Pensacola, Florida, when last heard from. Edward W. Robertson went to Springfield, Illinois, in 1899. He was killed by a train on his way to Peoria, Illinois. Donagan is searching for his father, near Huntsville, Alabama, so he can inform him.
View all 36 items