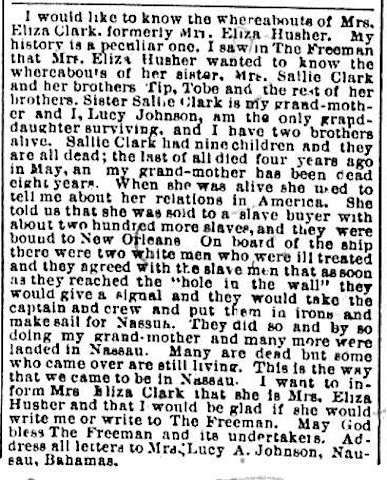 Lucy A. Johnson responds to a Lost Relatives Ad posted by Eliza Husher that, Sallie Clark, Eliza's mother, was Lucy's grandmother. They were both on board of a slave ship heading south [the Creole?], when the passengers led a successful mutiny and landed in Nassau, Bahamas.

This ad was posted in response to a prior ad by Eliza Husher. That ad can be found here: http://informationwanted.org/items/show/3002

I would like to know the whereabouts of Mrs.
Eliza Clark, formerly Mrs. Eliza Husher. My
history is a peculiar one. I saw in The Freeman
that Mrs. Eliza Husher wanted to know the
whereabouts of her sister, Mrs. Sallie Clark
and her brothers Tip, Tobe and the rest of her
brothers. Sister Sallie Clark is my grand-mother
and I, Lucy Johnson, am the only grand-daughter
surviving, and I have two brothers
alive. Sallie Clark had nine children and they
are all dead; the last of all died four years ago
in May, an my grand-mother has been dead
eight years. When she was alive she used to
tell me about her relations in America. She
told us that she was sold to a slave buyer with
about two hundred more slaves, and they were
bound to New Orleans On board of the ship
there were two white men who were ill treated
and they agreed with the slave men that as soon
as they reached the "hole in the wall" they
would give a signal and they would take the
captain and crew and put them in irons and
make sail for Nassua. They did so and by so
doing my grand-mother and many more were
landed in Nassau. Many are dead but some
who came over are still living. This is the way
that we came to be in Nassau. I want to
inform Mrs Eliza Clark that she is Mrs, Eliza
Husher and that I would be glad if she would
write me or write to The Freeman. May God
bless The Freeman and its undertakers.
Address all letters to Mrs. Lucy A. Johnson, Nausau,
[Nassau] Bahamas.