Contrabands is a term used in reference to enslaved men and women who escaped and sought refuge with the U.S. Army during the war. "Contrabands" followed Union troops as refugees, and some worked digging ditches, building fortifications, cooking, washing laundry, or sewing. Some enlisted in the U.S. Army. Historians estimate that by the war's end, approximately 500,000 enslaved people and freed people sought refuge behind Union lines.

Information is wanted of the whereabouts
of Ellen and Eliza Cooke, who left Athens,
Tenn., with Sherman's army in 1863. If
living, they may be going by the name of
McDermott. They will hear of something
to their advantage by writing to their broth-
er, Howard McDermott, Jalapa, Monroe
county, Tenn.

A Former Slave Hears from
Her Old Home.

A Separation of Thirty Years
Having Elapsed.

A Scrap of History.

Years before the war of the rebellion,
Wm. Eli Baxter, a lawyer and planter
lived in Hancock county, Georgia, not
far from the town of Sparta. He owned
150 slaves, among the number, Feraby,
a… 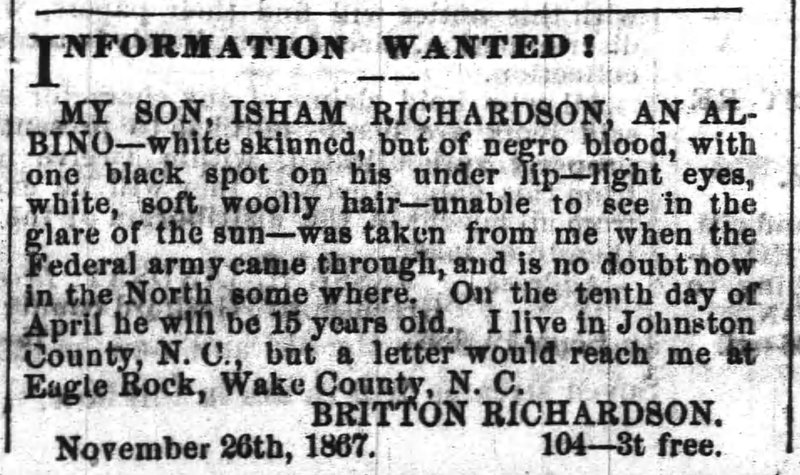 MY SON, ISHAM RICHARDSON, AN ALBINO—white
skinned, but of negro blood, with
one black spot on his under lip—light eyes,
white, soft woolly hair—unable to see in the
glare of the sun—was taken from me when the
Federal army came through, and is no doubt now
in the North some where. On the tenth day of
April he…

NEGRO FINDS MAN HE
SERVED IN WAR
Search of Nearly Fifty Years Ends
Successfully for Old Negro.
Pueblo, Col.––A revival of old mem-
ories [memories], harking back to the ante-bellum
days, when he as a boy was sold many
times on the auction block as a chat-
tel [chattel], and finally at the age of 17, learn-
ed [learned] of the war to… 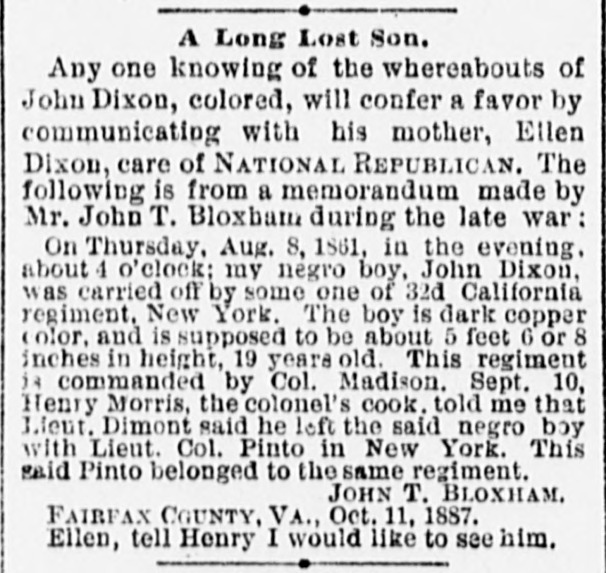 Any one knowing of the whereabouts of
John Dixon, colored, will confer a favor by
communicating with his mother, Ellen
Dixon, care of NATIONAL REPUBLICAN. The
following is from a memorandum made by
Mr. John T. Bloxham during the late war:
On Thursday, Aug. 8, 1861, in the evening,
about 4 o'clock; my negro boy,… 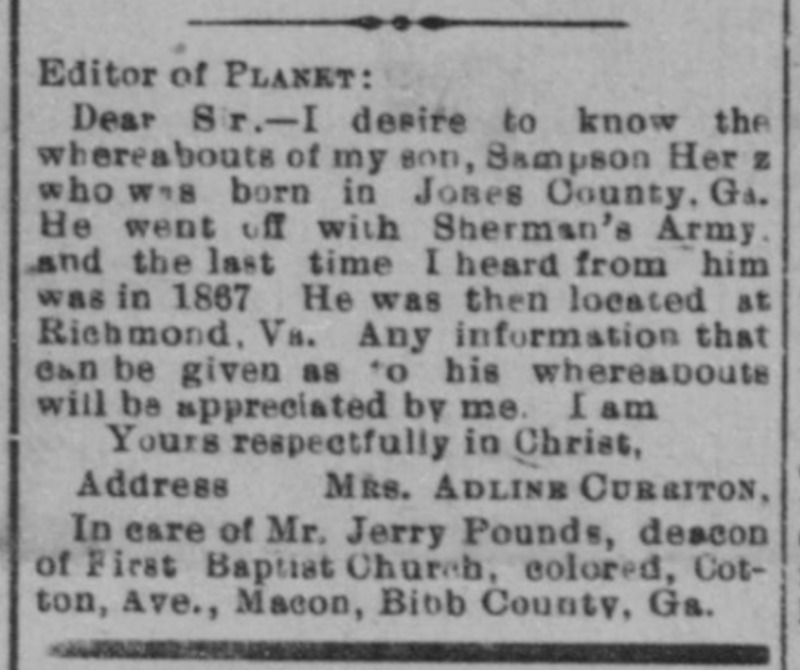 Dear Sir.-I desire to know the
whereabouts of my son, Sampson Her z
who was born in Jones County, Ga.
He went off with Sherman's Army
and the last time I heard from him
was in 1867 He was then located at
Richmond, Va. Any information that
can be given as 'o his whereabouts
will be appreciated by me. I am
Yours… 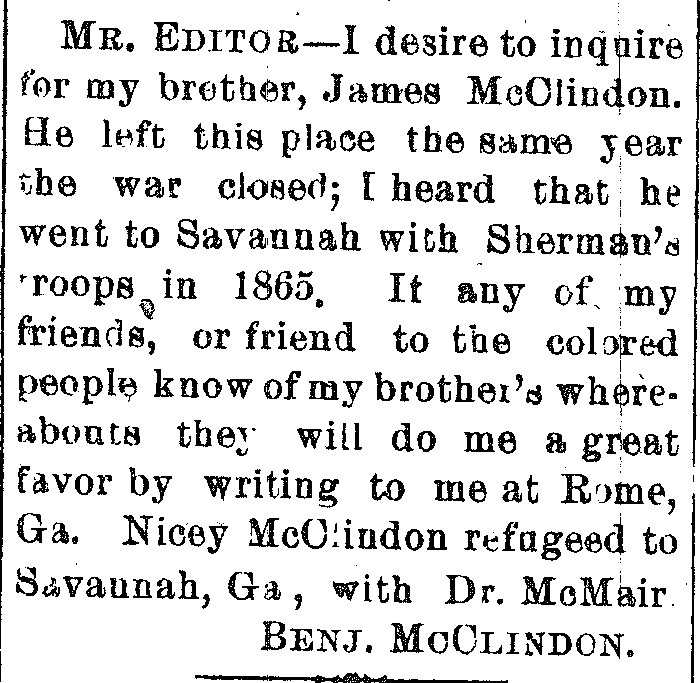 MR. EDITOR - I desire to inquire
for my brother, James McClindon.
He left this place the same year
the war closed; I heard that he
went to Savannah with Sherman's
troops in 1865. If any of my
friends, or friend to the colored
people know of my brother's whereabouts
they will do me a great
favor by writing to me at Rome,
Ga.… 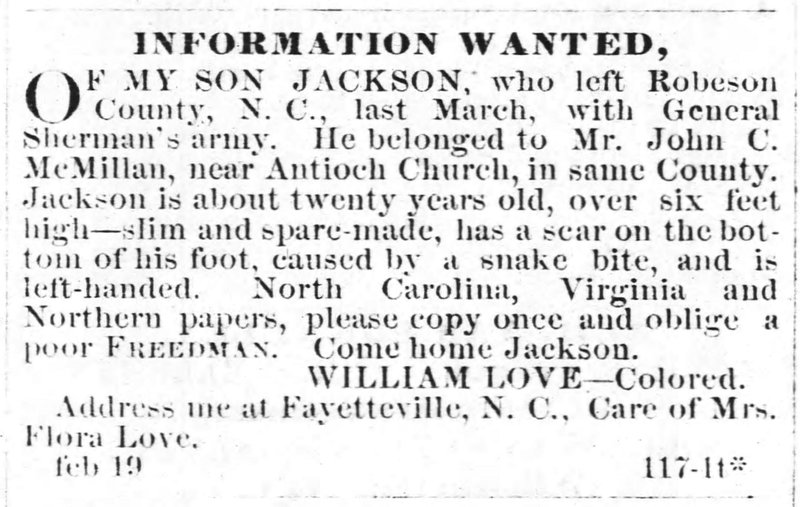 Of My Son Jackson, who left Robeson
County, N.C., last March, with General
Sherman's army. He belonged to Mr. John C.
McMillan, near Antioch Church, in same County.
Jackson is about twenty years old, over six feet
high -- slim and spare-made, has a scar on the bottom
of his foot, caused by a snake bite, and is… 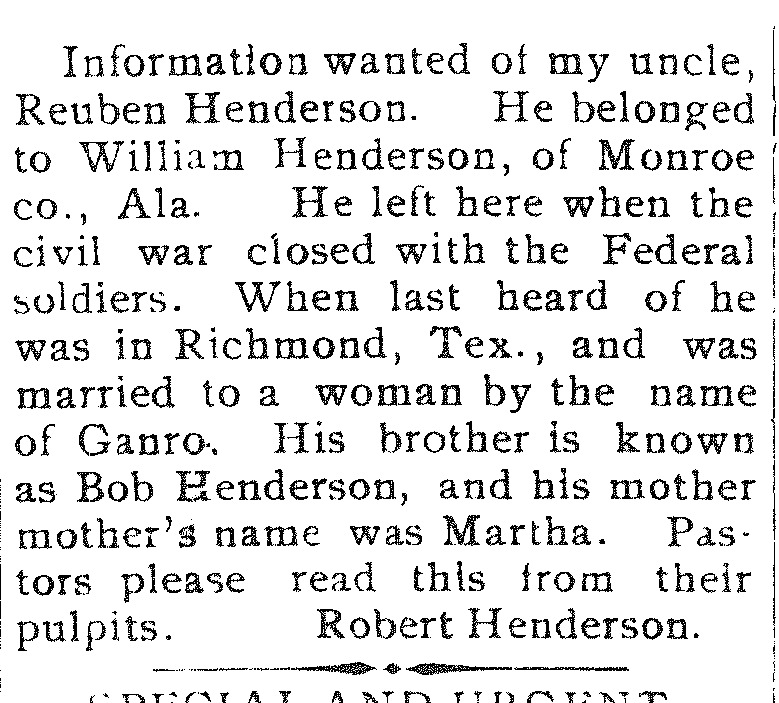 Information wanted of my uncle,
Reuben Henderson. He belonged
to William Henderson, of Monroe
co., Ala. He left here when the
civil war closed with the Federal
soldier. When last heard of he
was in Richmond, Tex., and was
married to a woman by the name
of Ganro. His brother is known
as Bob Henderson, and his mother
mother's name was…