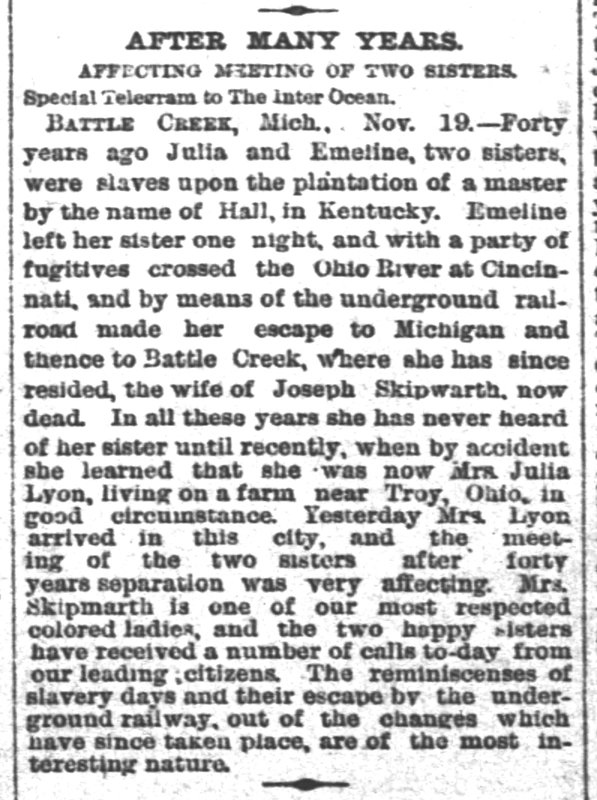 Emeline Skipwarth escaped from slavery in Kentucky to Michigan. Forty years later, in 1885, she found her sister, Julia Lyon, near Troy, Ohio.

Special Telegram to the Inter Ocean.

BATTLE CREEK, Mich., Nov. 19.--Forty
years ago Julia and Emeline, two sisters,
were slaves upon the plantation of a master
by the name of Hall, in Kentucky. Emeline
left her sister one night, and with a party of
fugitives crossed the Ohio River at Cincinnati,
and by means of the underground railroad
made her escape to Michigan and
thence to Battle Creek, where she has since
resided, the wife of Joseph Skipwarth, now
dead. In all these years she has never heard
of her sister until recently, when by accident
she learned that she was now Mrs. Julia
Lyon, living on a farm near Troy, Ohio, in
good circumstance. Yesterday Mrs. Lyon
arrived in this city, and the meeting
of the two sisters after forty
years separation was very affecting. Mrs.
Skipmarth is one of our most respected
colored ladies, and the two happy sisters
have received a number of calls to-day from
our leading citizens. The reminiscenses of
slavery days and their escape by the underground
railway, out of the changes which
have since taken place, are of the most interesting
nature.