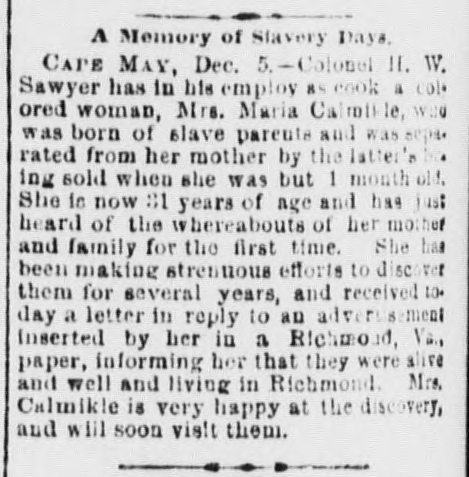 She was one month old when her mother was sold away. Found her family by placing an ad in a Richmond, VA newspaper.

A Memory of Slavery Days.
CAPE MAY, Dec. 5. - Colonel H. W.
Sawyer has in his employ as a cook a col-
ored woman, Mrs. Marcia Calmikle, who
was born of slave parents and was sepa-
rated from her mother by the latter's be-
ing sold when she was but 1 month old.
She is now 31 years of age and has just
heard of the whereabouts of her mother
and family for the first time. She has
been making strenuous efforts to discover
them for several years, and received to-
day a letter in reply to an advertisement
inserted by her in a Richmond, Va.,
paper, informing her that they were alive
and well and living in Richmond. Mrs.
Calmikle is very happy at the discovery,
and will soon visit them.