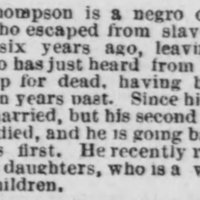 Mrs. Milla Dawsey (nee Milla Bond) searching for her son and her brothers 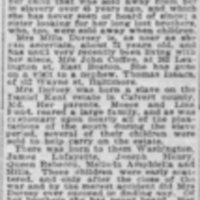 Newspaper article about Milla Dawsey's search for her family. Includes transcription of Dawsey's two Christian Recorder ads. Dawsey, from Calvert County, Maryland, had not seen her brothers or son since they were sold away from her. 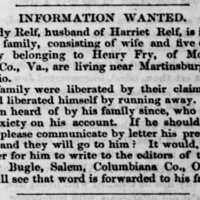 Quindy Relf escaped from slavery. His wife and their five children were later manumitted in Virginia and went to Ohio. They are searching for him. An antebellum ad. 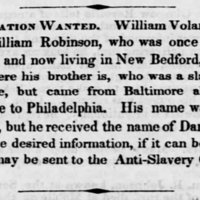 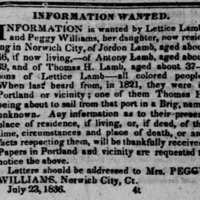 Lettice Lamb and her daughter, Peggy, of Norwich, Connecticut, searching for Lettice's sons. They were last heard from in 1821, in or near Portland, Maine. An antebellum ad. 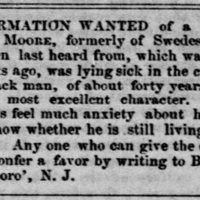 Information wanted of Moore, a "colored man" of Swedesboro, New Jersey, by his friends. He was sick in Boston when last heard from. An antebellum ad. 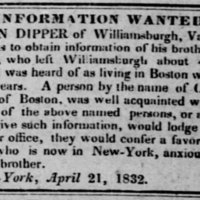 Merr left Williamsburg, Virginia, about 40 years earlier [ca 1792]. Last heard of in Boston, Massachusetts. Dipper is searching for him or Cesar Lafayette, who knew his brother Daniel Merr well. An antebellum ad. 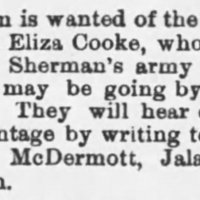 Ellen and Eliza Cooke left Athens, TN, with General Sherman's army in 1863 [during the Civil War]. 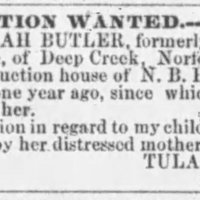 Hannah was sold from the auction house of N.B. Hill, of Richmond, VA, one year ago [in 1864, during the Civil War].

John M. Anderson searching for his father and two sisters 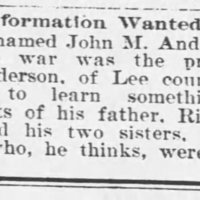 Anderson had been enslaved in Lee County, MS, by Mason Anderson. His father, Richard Anderson, and sisters, Polly and Rachael, were sold.

Jannie Bell is looking for her brother 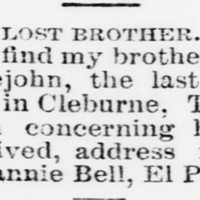 Jannie Bell is looking for her brother, Lee Littlejohn, who was last seen in Cleburne, TX

Paralee Hammonds is looking for her son Paralee Hammond is searching for her son, Turner Hammond, who was last seen in Itaska, TX

Mahalia Johnson is searching for her mother Mahalia Johnson is searching for her mother, Betsey Ann Taylor

Rachael Sharp is looking for her siblings 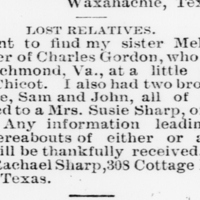 Rachael Sharp is looking for her sister Melvina and her brothers, Sam and John, who were last seen in Chicot, VA, where they were enslaved by Susie Sharp

Bennie A. Smith is looking for his in-laws Charlie, Grandson, and Isaac Whitfield 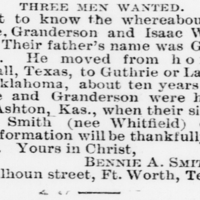 Bennie A. Smith, who married Hattie Smith (nee Whitfield) is searching for Charlie, Granderson, and Isaac Whitfield, his in-laws. F. K. Steele searching for Adeline and Mary Wheeler who were sent to Virginia during the first year of the Civil War. 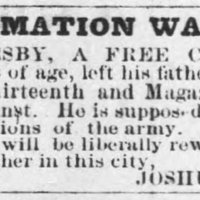 James, a "free colored boy," left his father's house in Louisville, KY, in 1862. He is supposed to have followed one of the divisions of the army. 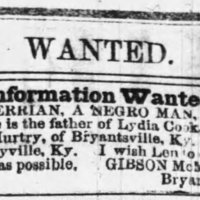 Perrian, a brick mason, is the father of Lydia Cook, who "belongs to" James McCurtry, of Bryantsville, KY. He formerly lived in Shelbyville, KY. 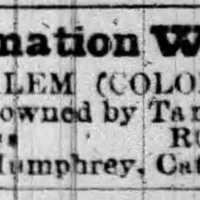 She was "formerly owned by Tamond Hooper," of Cobb County, GA.

Wm. Garnet searching for his wife Jane and children Willis, Abraham, and Jeney 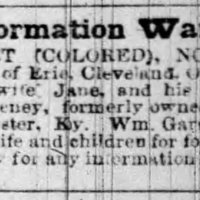 Wm. Garnet searching for his wife, Jane, and his children, Willis, Abraham, and Jeney, formerly enslaved by Daniel Garnett, of Manchester, KY. He has been separated from his wife and children for 14 years [since ca. 1851]. 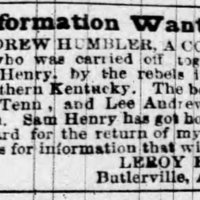 Humbler's sons were carried off by the Rebels in some of their raids in southern Kentucky. 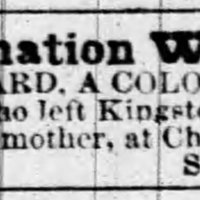 Susan Howard searching for her son Billy Howard, age about 19, who left Kingston, Georgia, in the spring of 1864.
View all 43 items