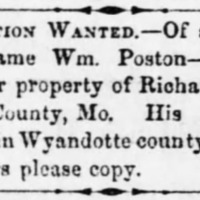 Mary Carr looking for her son, William Poston, who was formerly enslaved by Richard Poston. 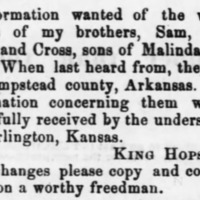 King Hopson seeking information about his brothers Sam, Giles, Allen, and Cross, who were last known to be in Hempstead, AR.

Caroline Perkin searching for her mother and siblings 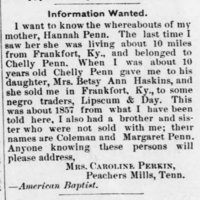 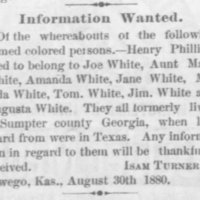 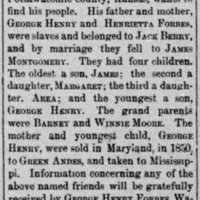 Forbes and his mother were sold in Maryland in 1850, to Green Andes, and taken to Mississippi. Forbes' parents: George Henry Forbes and Henrietta Forbes. Grandparents: Barney and Winnie Moore. 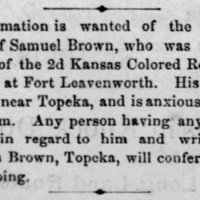 Samuel Brown was mustered out of the 2d Kansas Colored Regiment last fall [1865] at Fort Leavenworth. His father is anxious to hear form him. 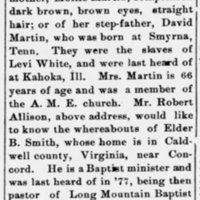 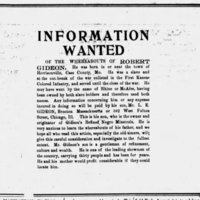 W.S. Brown searching for his brother, Will Doubtly 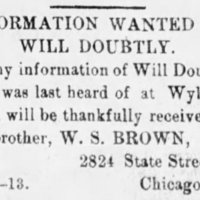 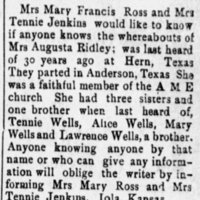 Mrs. M.J. Brownlee searching for her aunt and her grandmother 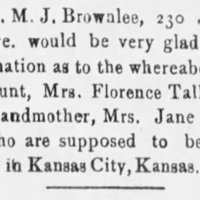 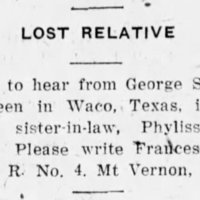 Last seen in Waco, TX, in 1866, by his sister-in-law, Phyliss Pettigrew 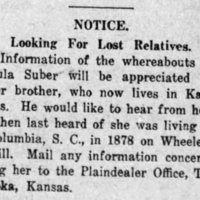 Last heard of her in 1878, when she lived in Columbia, South Carolina, on Wheelers Hill.

Austin Marshall searching for his wife, Mrs. Elizabeth Marshall and her two children Granson and Jeannette They are "mulatto" and from the Creek Nation. They escaped, presumably to the North, from Maysville about ten days after the Civil War battle there. 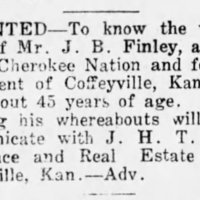 Smith, insurance and real estate agent, searching for Finley, a citizen of the Cherokee Nation 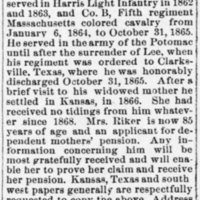 Riley Driver searching for his son Jeff Prior and his sister Rosana Driver. They were last known to have lived in Pike County, Georgia. 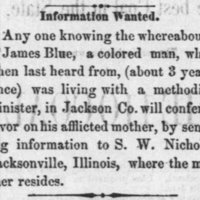 She lives in Jacksonville, Illinois. Her son, James Blue, lived in Jackson County, Kansas, when last heard from [in ca 1864, during the Civil War]. Richard Jones and Jane Vaughn reunited and married in 1899 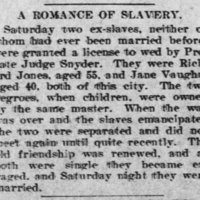 Jones and Vaughn, of Kansas City, Kansas, were separated after emancipation. Reunited and married in 1899.

Information wanted of the whereabouts of Wm. P. Grant 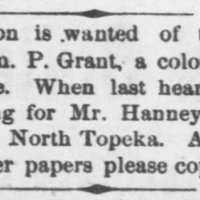 Nat Miller reunited with his sister Nat Miller/Nate Miller/Nathan Miller, of Lawrence, Kansas, lost his sister "during slavery times." He found her in 1904. 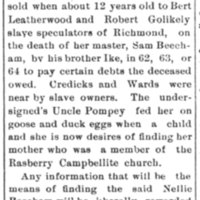 Hampton was sold away from her mother, in Richmond, Virginia, during the Civil War.
View all 32 items