Celia searching for her children, Caroline Vickers and Joe Vickers 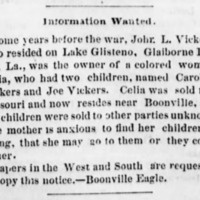 Celia, of Boonville, MO, searching for her children, Caroline Vickers and Joe Vickers 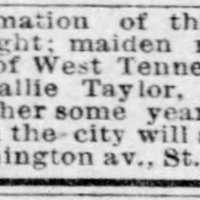 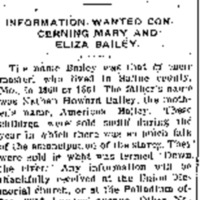 Unnamed person looking for sisters Mary and Eliza Bailey who were sold south from Saline County, MO in 1860 or 1861. 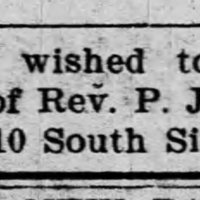 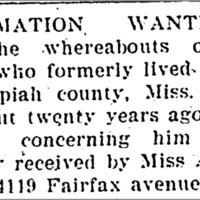 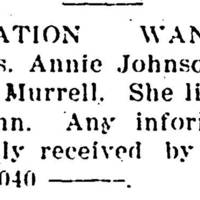 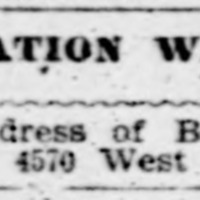 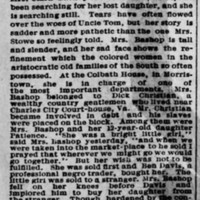 Mrs. Clara Bashop seeking information about her daughter, Patience, who she last saw at Charles City Court House, VA where they were sold separately to pay their enslaver Dick Christian's debts. Albert Harris and Mariah Harris reunite after 37 years and remarry 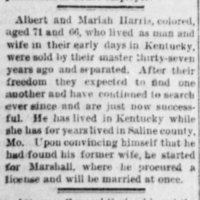 They were separated, in Kentucky, by sale 37 years earlier [ca 1849]. Albert Harris found his wife after searching since the Civil War. 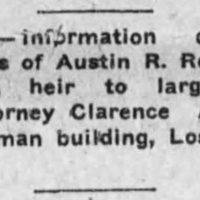 Jones, a Los Angeles, California, attorney, is searching for Roulhac. He is heir to a large estate.

"Uncle Levi" and "Aunt Aggie" reunited and remarried after 40 years 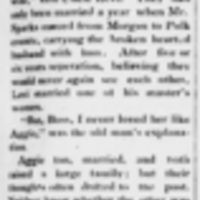 They were separated in Morgan County, Georgia, in 1844. 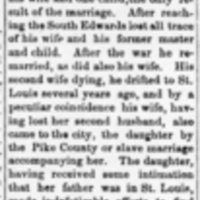 Edwards and Gibson had been enslaved in Pike County, Missouri. Edwards was sold South 35 years earlier [ca 1853]. They reunited in St. Louis, Missouri, in 1888, and remarried then. General Butler searching for Rebecca and Patsey who were "once the servants of" Mrs. Caroline B. Trumbull, of Louisiana. Butler thinks they are in St. Louis, Missouri. 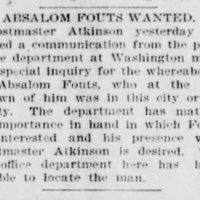 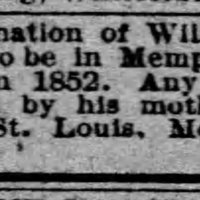 Martha Hunt seeking information about her son William Talbert who was sold by Henry Patterson in 1852. 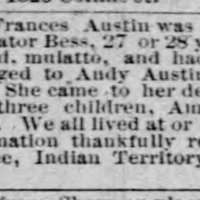 Mitchell is searching for Rogers to settle an estate. Rogers is to inherit two thousand dollars. James Rogers is sometimes known as James Washington "because of slave parents." 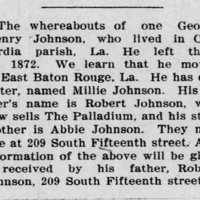 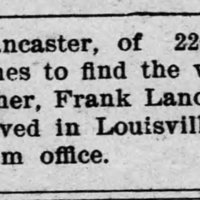 Searcher lives in St. Louis, MO. He and his brother formerly lived in Louisville, Kentucky. 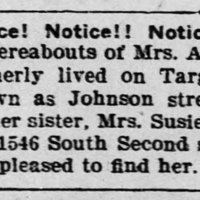 Both had lived in St. Louis, MO. 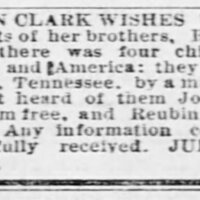 She and her brothers, Reubin and William Gibbins, were raised in Hopkins County, Tennessee. Her brothers were set free when John Gibbins died. Reuben went to Centralia, Illinois.
View all 29 items