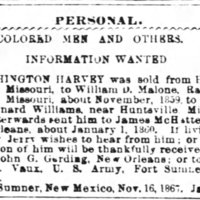 Jerry Harvey is looking for his brother Washington Harvey in New Orleans.

C. A. Halley searching for Mrs. Fleming, the wife of Harvey Fleming 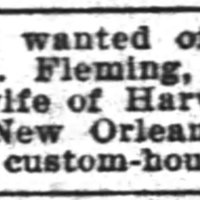 Thomas Doss searching for his parents Isaac and Nancy Doss 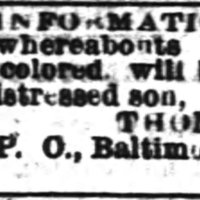 Martha Cobble finds her two sons after a 40-year search 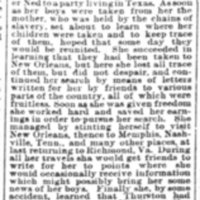 Cobble found her sons, Thurston Cobble and Ned Cobble. They were sold to a New Orleans slave trader in Richmond, VA, 40 years earlier, in 1849, to fund slaveholder's trip to gold rush California. 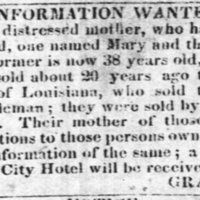 Boyd placed this ad in 1841, twenty years before the Civil War. Her daughters had been sold about twenty years earlier [ca 1821] by George Boyd, of Nashville, to Blount Robertson, of Louisiana. 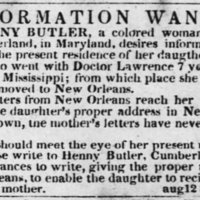 Frances was taken from her mother, in Cumberland, Maryland, to Natchez, Mississippi, and then New Orleans, Louisiana. Her mother, Henny Butler, received letters from her but needs her address in New Orleans to reply. An antebellum ad (from 1843). 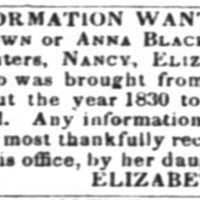 Butler's mother, Anna Brown/Anna Blackwell, and three sisters were brought from Virginia to New Orleans about 1830 and sold there. Butler placed this antebellum ad in 1840.
View all 7 items