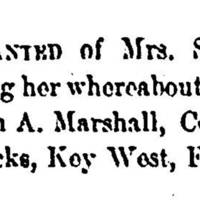 Sgt. John A. Marshall is looking for his mother, Sarah E. Marshall.

Members of the Dennis family seek Andrew and Richard Dennis 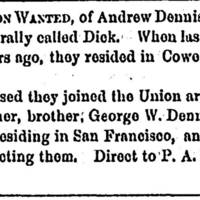 Family members of Andrew and Richard Dennis are seeking information about them. Both of them last seen in Coweeche County, Georgia in about 1859. 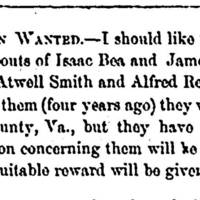 Isaac Bea, James Bea, Annanias Harcum, Atwell Smith, and Alfred Redman, are sought by a person whose name is not revealed in the ad. 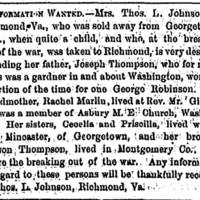 Mrs. Thomas L. Johnson is looking for several members of her family. 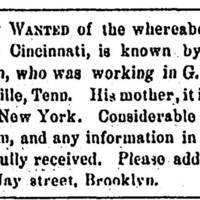 Samuel J. Howard is looking for information regarding the location of Joseph Post (who also might be known as Joseph Clinton). 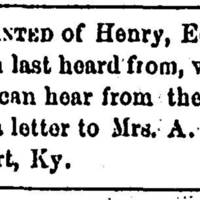 Mrs. A. Haney and Mrs. M. E. Lynn are looking for Henry, Edward, and Jinney Haney. 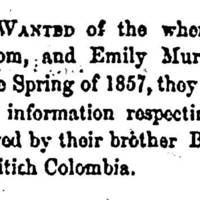 Burton Isom is searching for his brothers, James and Ormand Isom, and his sister, Emily Murray. They were last seen around St. Louis, Missouri.

Matilda Wetherall is searching for Robert Tolliver and his wife, Alice 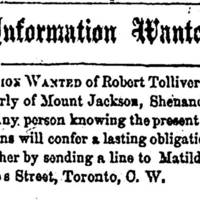 Matilda Wetherall is searching for Robert Tolliver and Alice Tolliver of Mount Jackson, Shenandoah County, Virginia. Wetherall appears to have been the mother of one of these individuals. 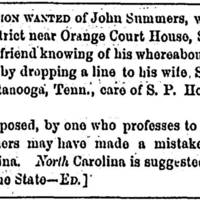 In 1865, Susan Summers was looking for her husband, John Summers, who she believed was located in South or North Carolina. 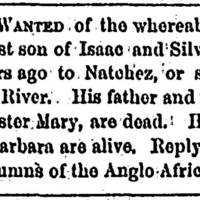 The surviving siblings of Wesley Brooks are searching for him. He was sold to Natchez or thereabouts in approximately 1835. 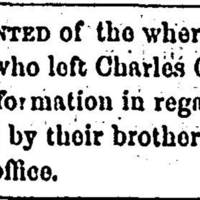 John E. Onley is searching for his two brothers, Charles and Henry. 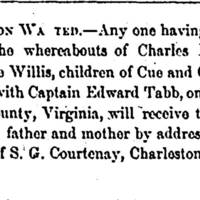 Caroline and Cue Willis are looking for their son and daughter, who were formally with a Captain Tabb in Virginia. 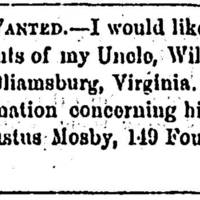 Augustus Mosby is looking for his uncle, William Briggs. 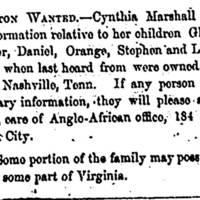 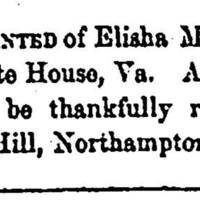 Phillip Merryday is looking for Elisha Merryday and Major Merryday. 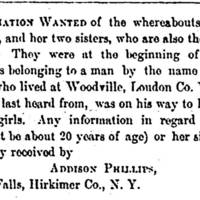 Addison Phillips is looking for Ellen Fitzhugh, his sister-in-law, and two other unnamed sisters-in-law.
View all 16 items