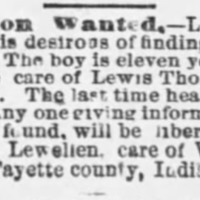 Lewis Lewellen, seeking information about his son, Clayton Lewellen, who was left with Lewis Thompson. 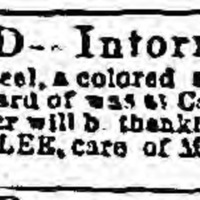 Sarah Lee, Eldora, Iowa, searching for her daughter. In Cairo, Illinois when last heard from. 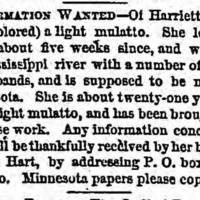 Nelson Hart, Chicago, Illinois, searching for his sister, Harriett Shipley. She went up Mississippi River from St. Louis, MO, with a number of other "contrabands." Supposed to be in Minnesota.

Abraham Blackburn finds his mother after writing 236 letters of inquiry 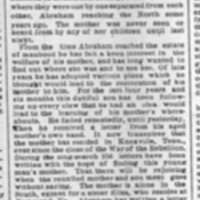 Abraham Blackburn finds his mother after writing 236 letters of inquiry. Blackburn was sold away from his mother in 1862. He continues to search for several siblings. 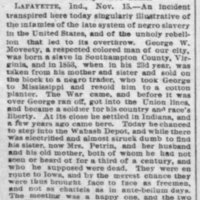 George W. Moveety, sold away from his family in 1853, meets them in a train station after 33 years 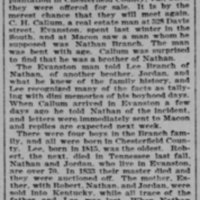 Nathan Branch, the "oldest colored man" in Evanston, Illinois, learns that his brother lives in Macon, Georgia. They were separated by sale in 1833, in Chesterfield County, Virginia. 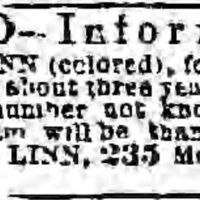 Winnie Lynn searching for her husband Davy Linn who left Chicago, Illinois with an Illinois regiment around 1861, during the Civil War 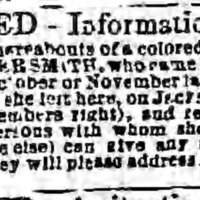 Fanny Wintersmith traveled from New York to Chicago in 1863, during the Civil War. She left her two children there before returning to New York.
View all 8 items